Be Part of a Miracle

This article, written recently by Gary for a local newspaper, explains in a nutshell why we do what we do ... and explains what we all can be part of - a miracle!

Go everywhere in the world,
and tell the Good News to everyone.

This command is termed "The Great Commission" because Jesus emphasizes this so clearly in each of the first four books of the New Testament. Therefore, since Jesus puts so much importance on this, one would think that we Christians would take it seriously. Yet, in actuality, sharing the Good News of what the eternal Son of God has done for us - entering our world as a man, living a sinless life, revealing His power and His love, giving up His life to pay the penalty of death for our transgressions, and then rising from the dead to conquer death for all mankind - is something most of us don't really do very often.

The Bible even gives us many promises of His presence and His help if we do get up the nerve to share. In fact, Isaiah 55:10-11 uses the comparison of sharing God's Word with a farmer sowing seeds for his crops to emphasize that when we share God's truth, it actually will sprout and grow. We have the promise from this passage that sharing will not be in vain, but will actually accomplish God's purpose in that persons life! Yet, because of it's supernatural aspect, this can be difficult for us to grasp. As a result, we may still shrug off sharing, thinking that it won't do any good, or that others won't listen to what we say anyway.

But this shouldn't dissuade us. In Mark 4:26-27 we read the story of how the farmer scatters seed, and the seed sprouts and grows, but even the farmer does not know how that actually happens.

It's somewhat of a mystery that God just makes happen.
Yet we know that all the farmers in this world
still plant their seed every season.

So, too, when we share the gospel, God is the one who makes it bear fruit. Therefore, it's not up to us; it's up to God. We can trust Him even though we don't understand it all. In fact, we should marvel that we can be part of the miracle that God can do in someone's life.

In 1973 a 2,000 year-old cache of date palm seeds was discovered on the mountain called Masada in Israel. In 2004, another researcher persuaded those holding this ancient cache of seeds to give him some seeds to try planting them. They gave him just three seeds. Out of those three, one of them actually grew! It actually sprouted and grew after over 2,000 years! (Israel My Glory, Article by Peter Colon, page 31, May/June 2014).

If a date palm seed can last 2,000 years and still sprout and grow, we should be able to believe that God can take a seed of truth that we share with someone, and make it grow at the proper time. Galatians 6:9 says, "And let us not grow weary of doing good, for in due season we will reap, if we do not give up." And II Corinthians 9:10: "He will multiply your seed ... and increase the harvest of your righteousness."

Cru (Campus Crusade for Christ) has an encouraging way to look at sharing God's Good News: "It's simply taking the initiative to share Christ in the power of the Holy Spirit, leaving the results to God." In other words, anyone can share Christ.

It's up to God to take that seed of truth that we share
and cause it to sprout and grow in someone's life.

What could we do that would be more fulfilling than that?

(This is a devotional article, written by Gary, as published in The Enterprise, a weekly newspaper in Washington County.)

Posted by Gary and Cherry at 10:26 AM No comments:

Email ThisBlogThis!Share to TwitterShare to FacebookShare to Pinterest
Labels: Devotionals, Serving with Cru

Continuing on with digital scrapbook pages - preserving memories of a five-day visit from our Siebert family ... 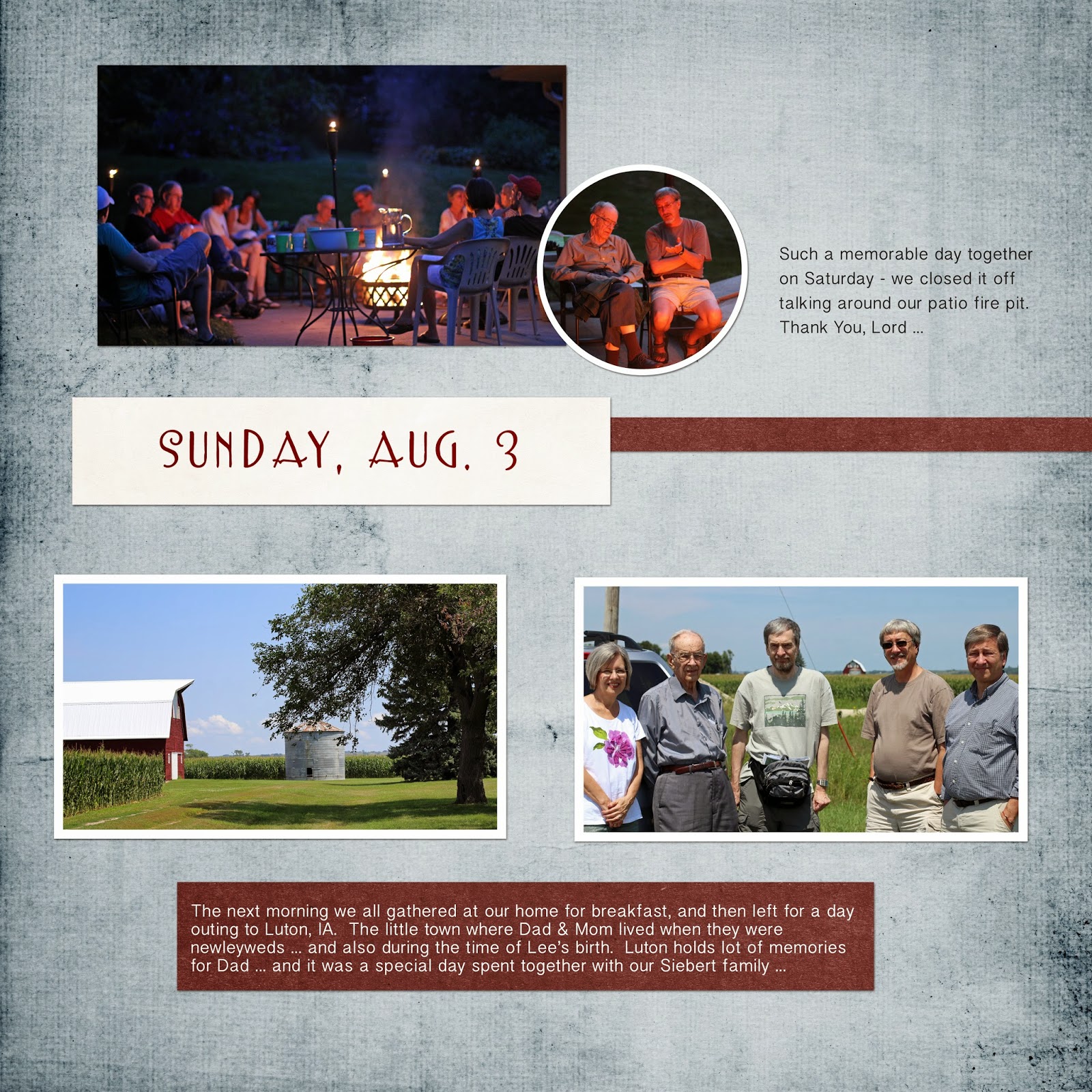 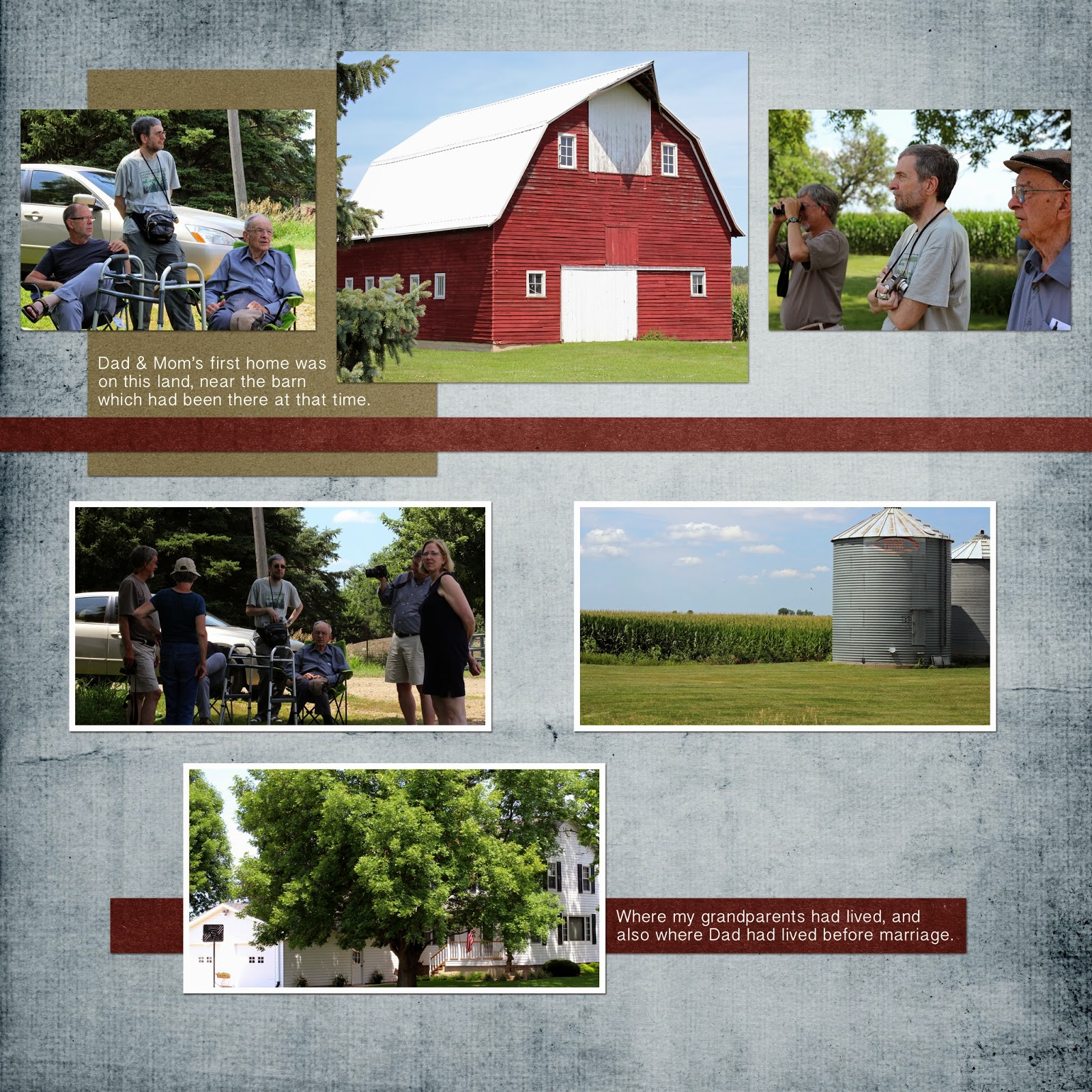 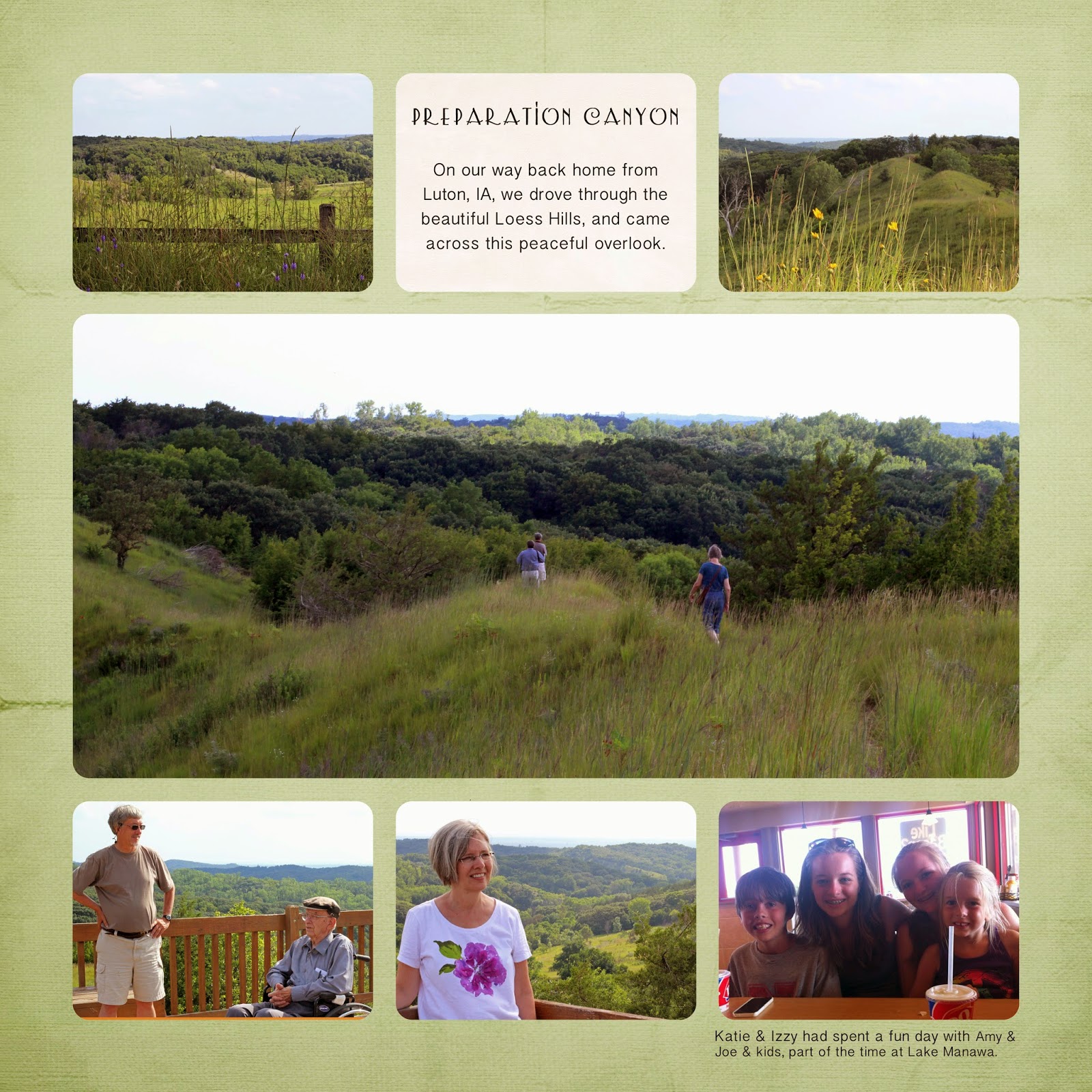 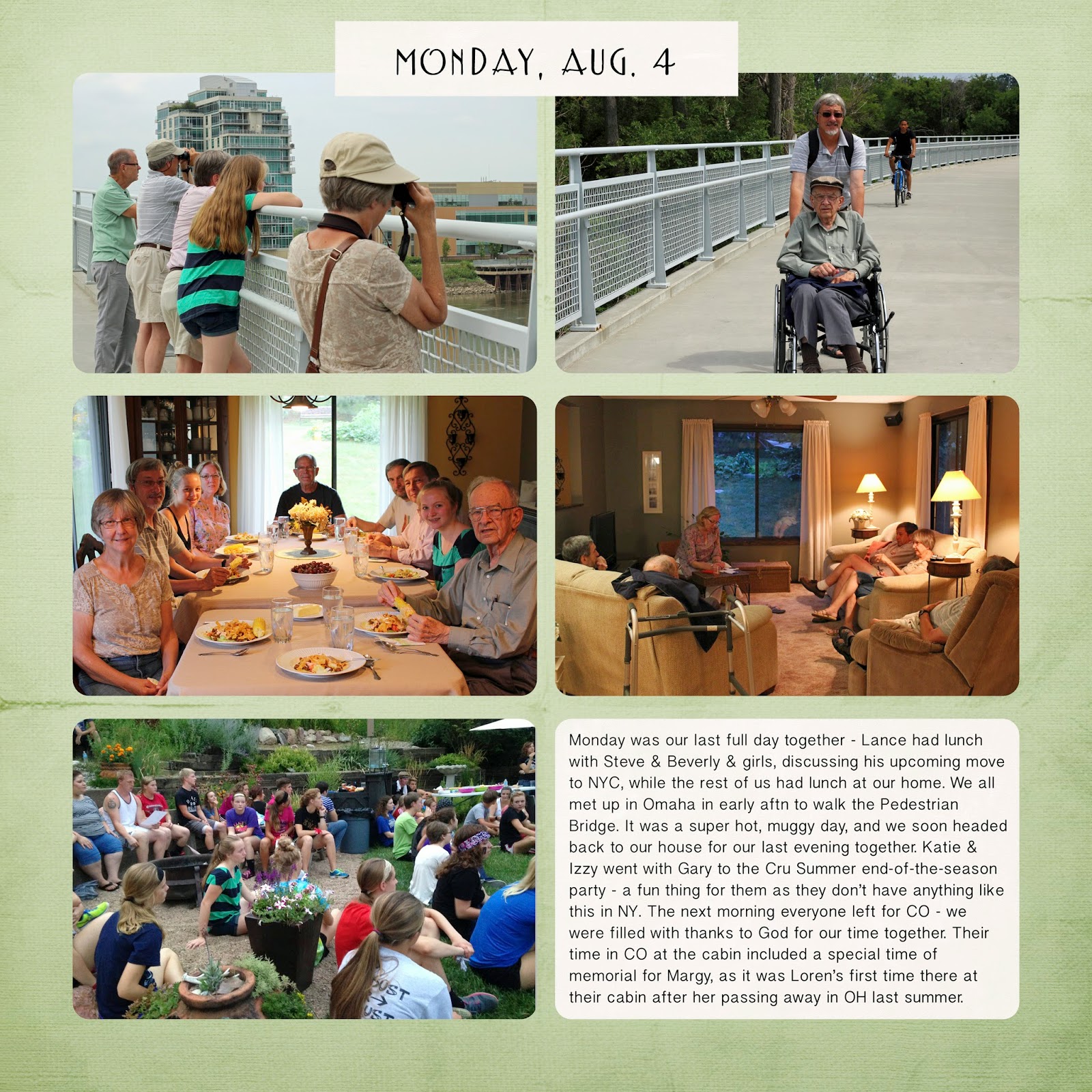 
Posted by Gary and Cherry at 3:40 PM No comments:

Preserving memories in digital scrapbook form of the wonderful visit we had with our Siebert family earlier this month ... thanking God for the very special five days He gave us together! The visit was especially significant as we could all spend time together with our 93 year-old father. We see him often, as he lives a short 20 minute drive from us - but this was the first time for him to see his three sons & their families since 2011, three years ago. 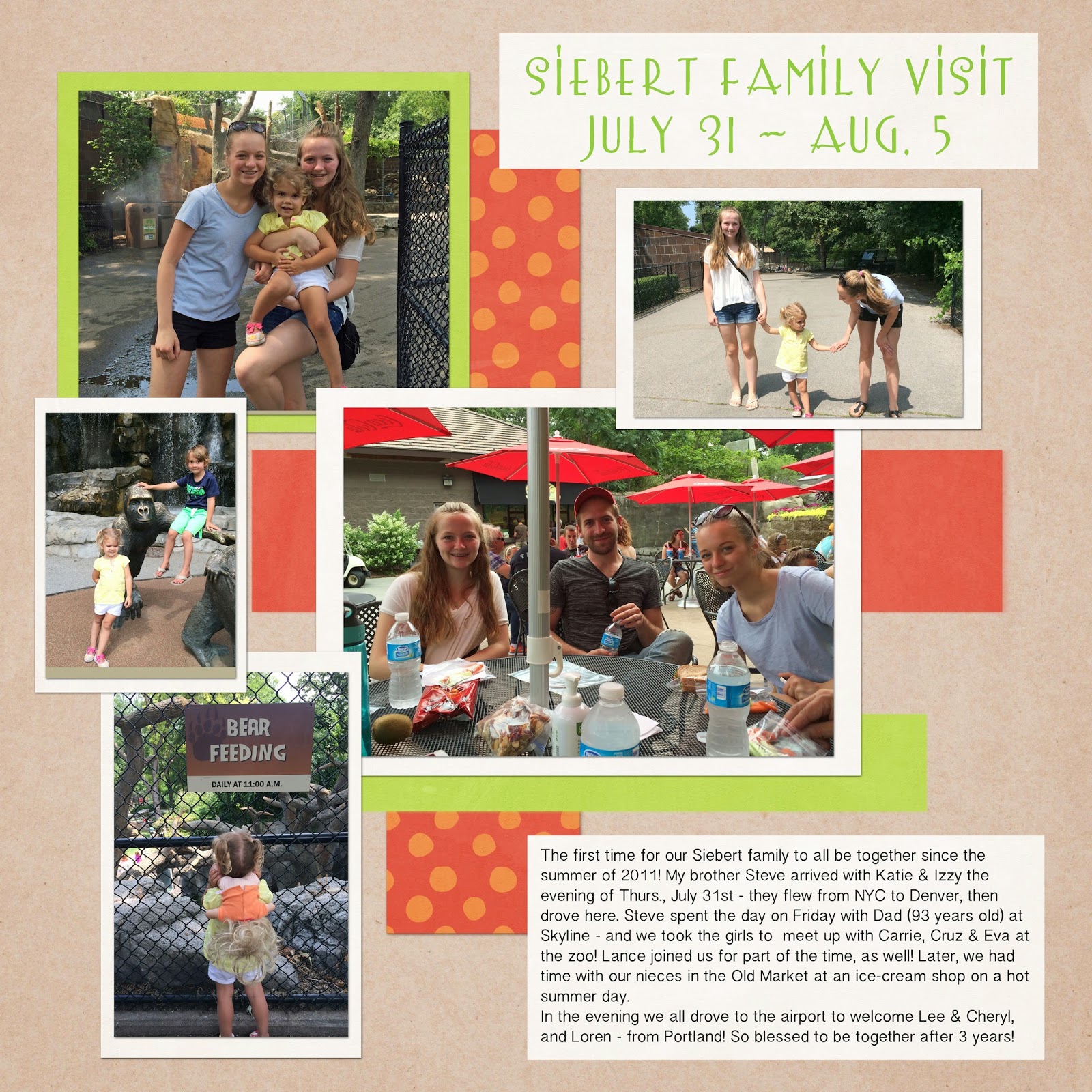 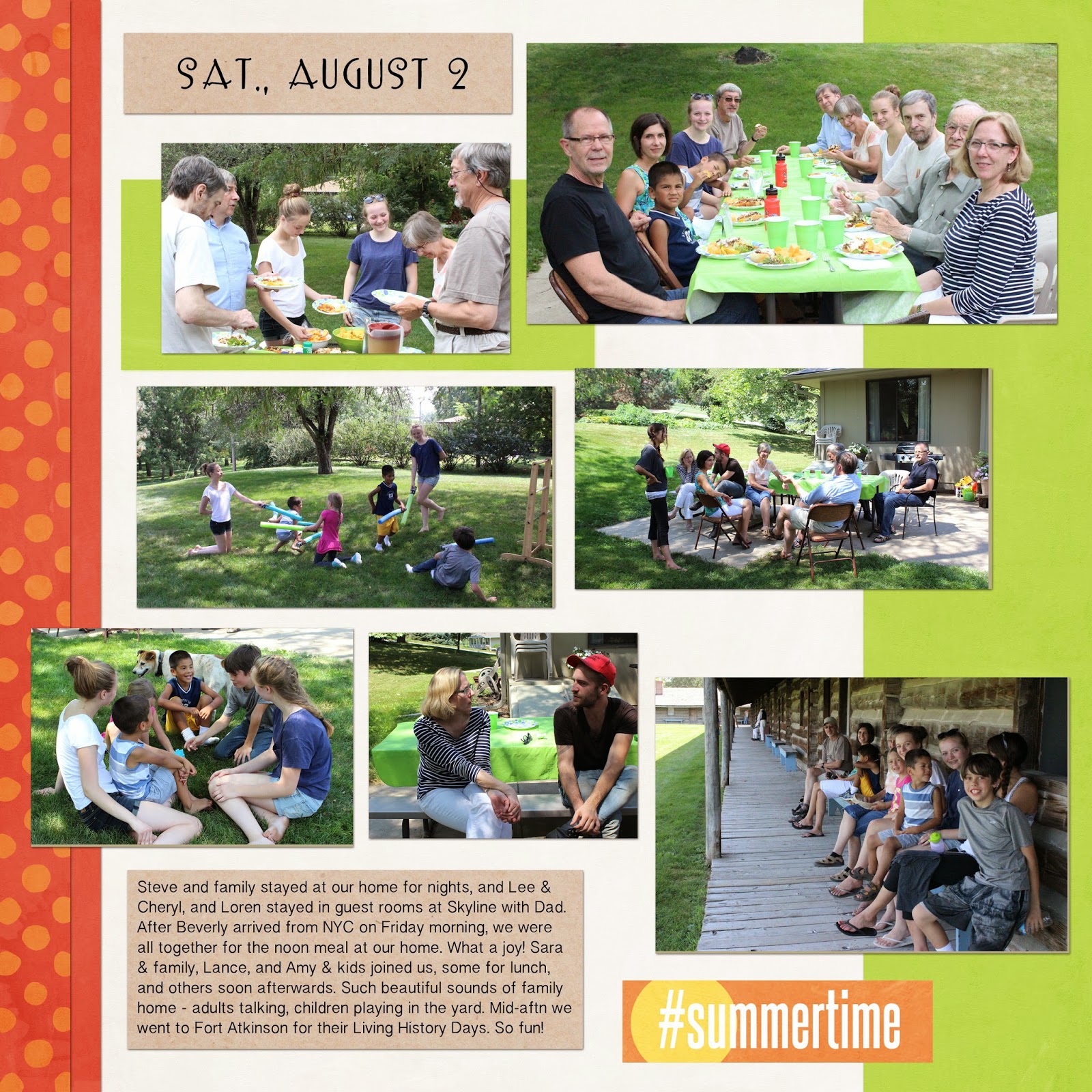 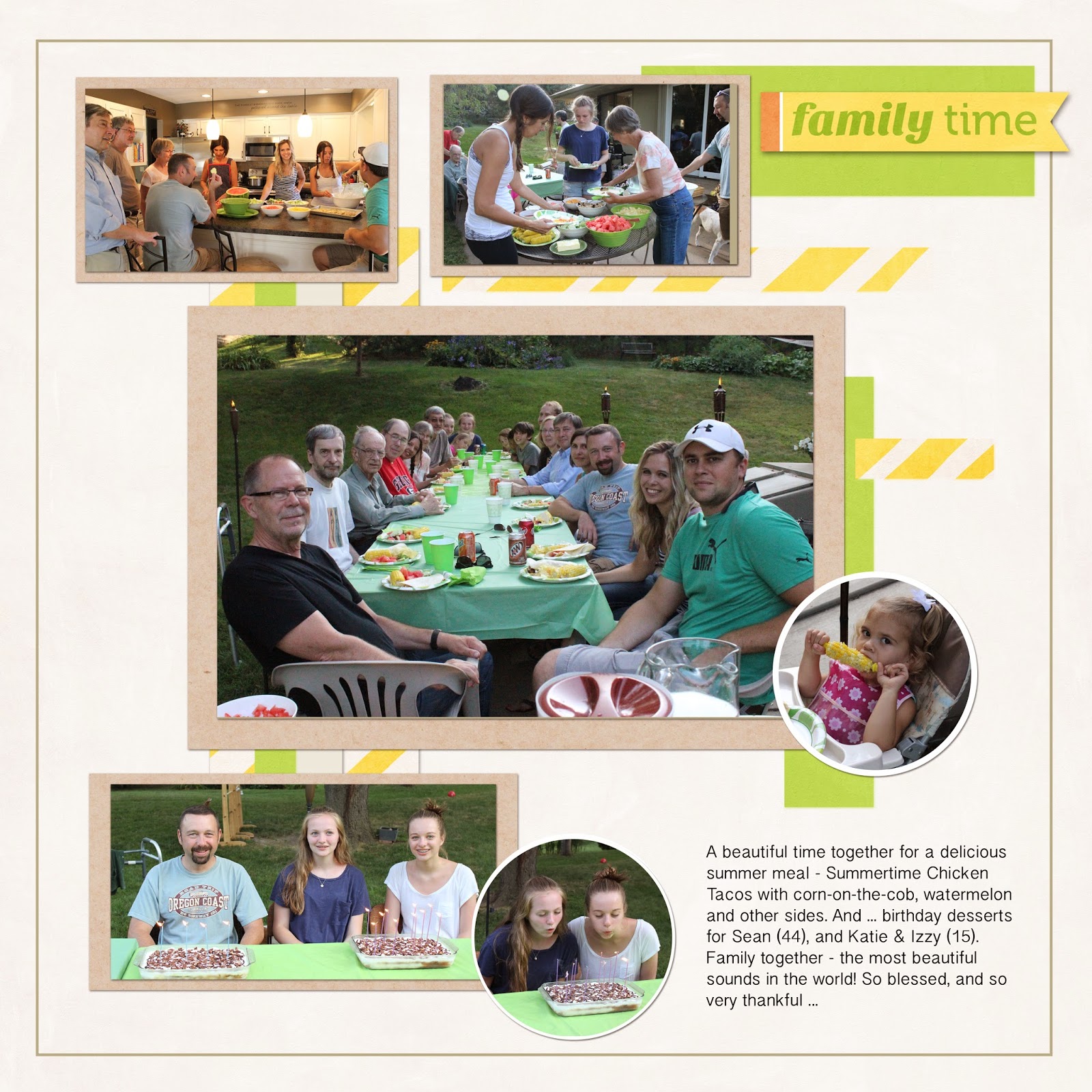 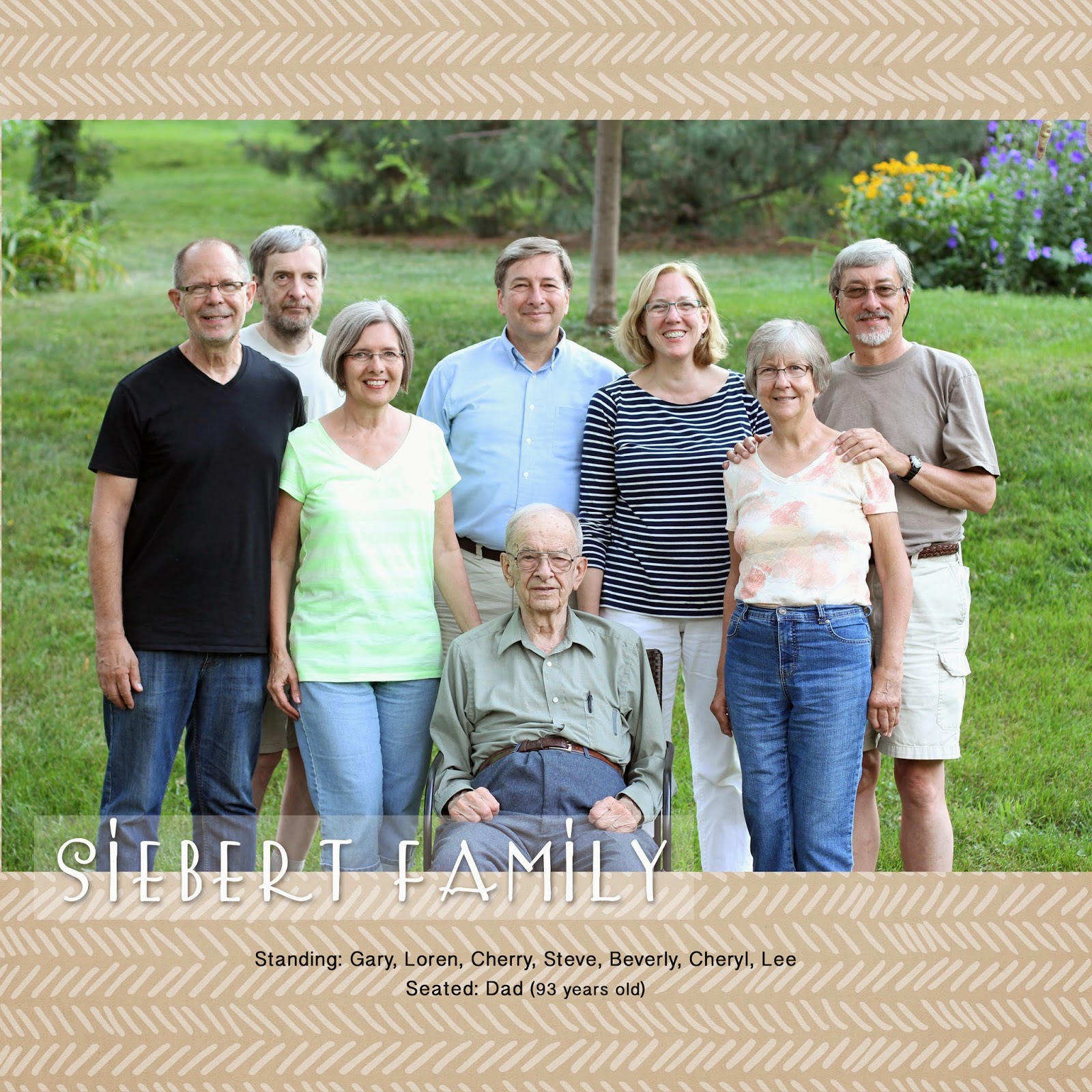 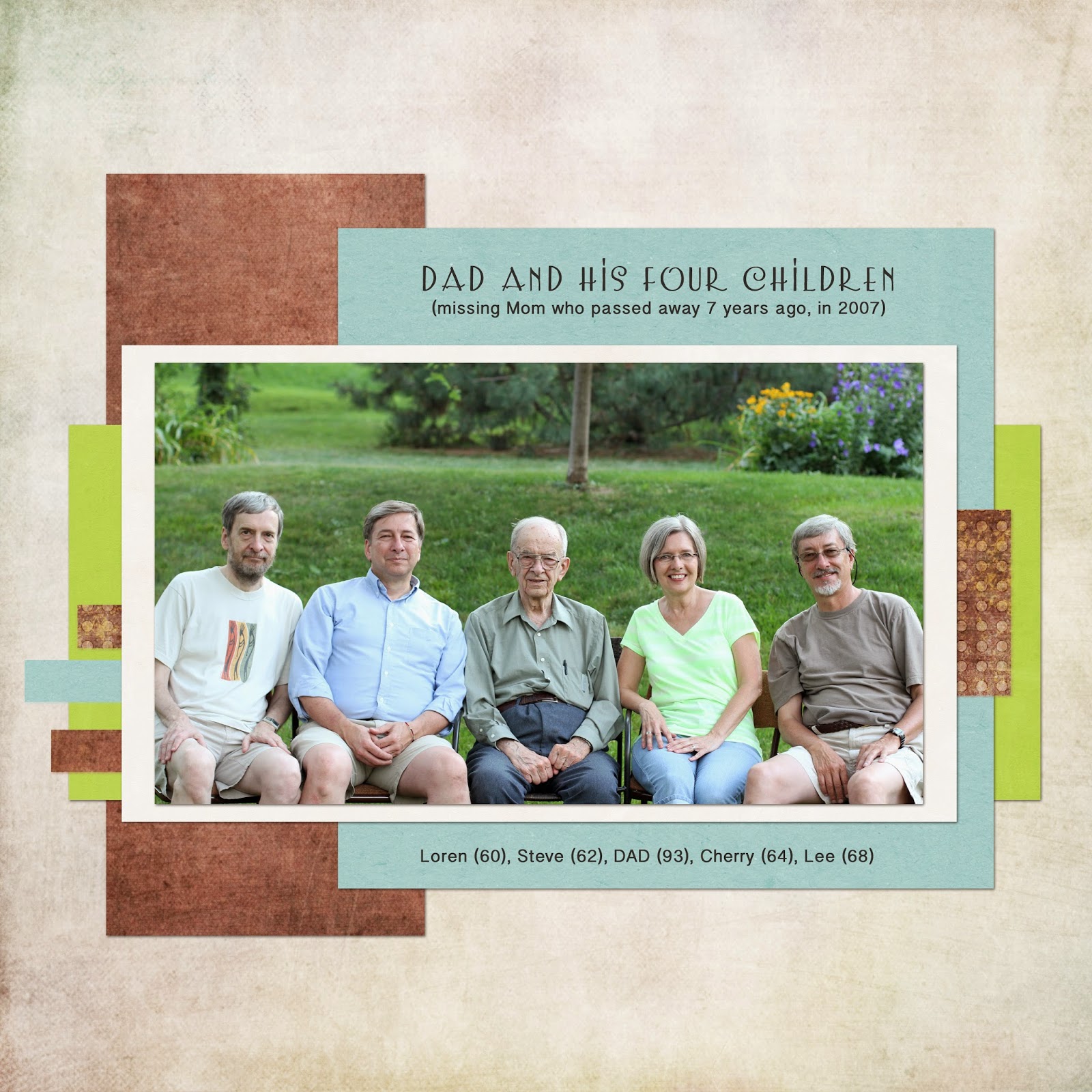 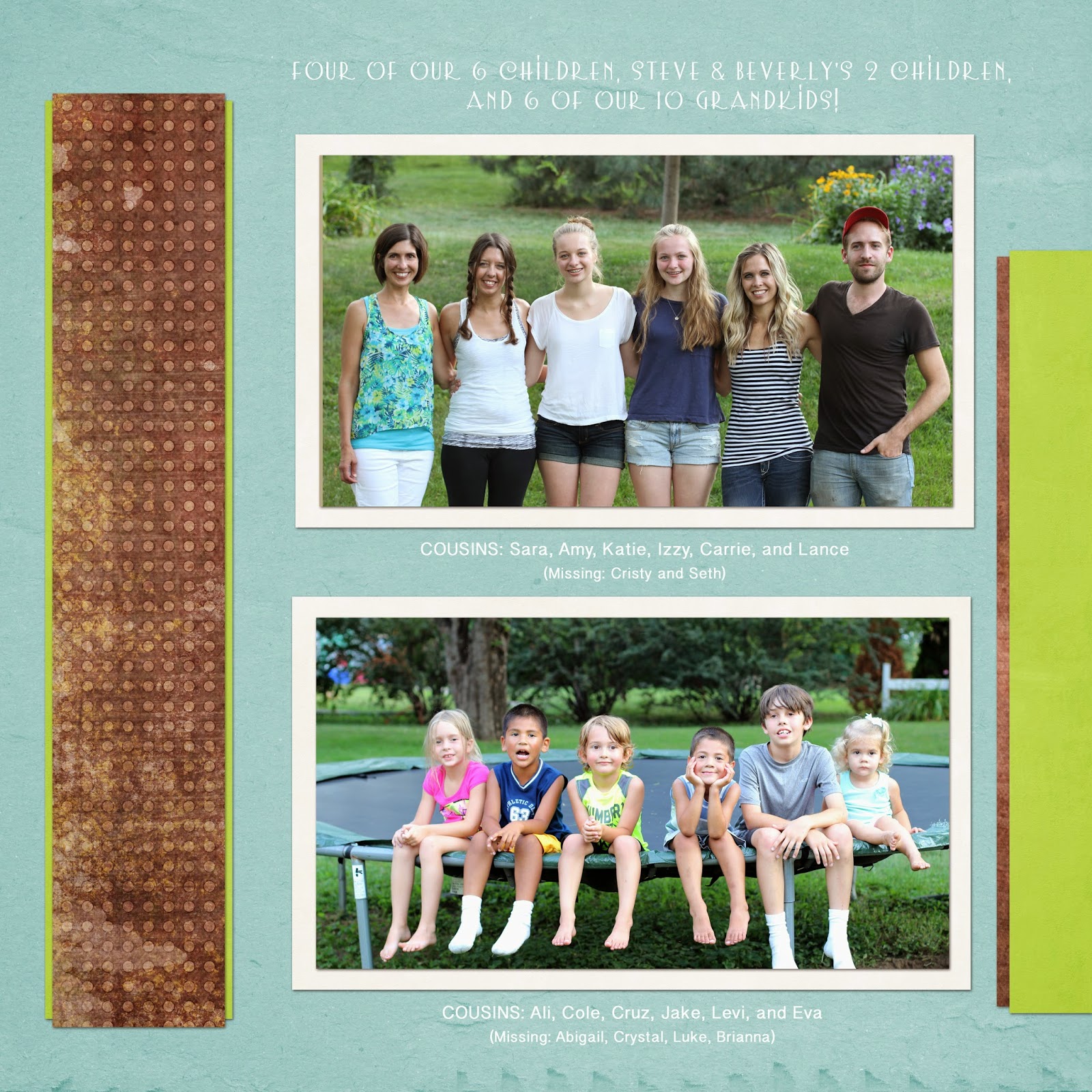 Click here to see more photos in Part 2 of our Siebert Family Visit ...

Posted by Gary and Cherry at 3:35 PM No comments:

We just spent five wonderful days together with our Siebert family. All three of Cherry's brothers traveled here - two from the west coast, and one from the east coast. Lee with his wife Cheryl, came from the Portland area. Steve with his wife Beverly, and twin daughters, Katie & Izzy, came from just north of New York City. And Loren came from Portland, where he has recently moved after the loss of his sweet wife, Margy, last summer.


It was a very memorable five days together, our first time to gather in three years. Though the brothers live on opposite coasts, we are blessed to live right in the middle, and also near our father ... so our home becomes the place for us to gather.

Our father greatly appreciated having each of his four children together ... and we all missed our mother, who passed away nearly seven years ago.

It was also a very special time for cousins to be together - four of our six children, and Steve & Beverly's two daughters ...


And what fun for everyone to spend time with these six (of our ten) sweet grandkids!


We were so very blessed by these five days together! Check back here in the days ahead, as we'll be sharing more photos in digital scrapbook form. So many memories to treasure, and so much to thank God for!

Posted by Gary and Cherry at 6:08 PM No comments:

Our daughter, Cristy, heard the pathology report (after the removal of a cyst on one of her kidneys) five days after her July 28th surgery. We were at the airport at the time that we received her call from Dallas, waiting for the arrival of several of Cherry's family for a five day visit. We were stunned to receive the news from Cristy ... her cyst was cancerous.

Here is the news, as they shared it on their CaringBridge site:

"Unbelievably, my lesion was also cancerous. The same kind of cancer as Mark's ... renal cell carcinoma. There were even some aggressive areas which put it at a grade 3 (Mark's was grade 2). The good news is that the margins were clear, which means they got it all. ... My prognosis is the same as Mark's ... no other treatment is required because they got it all out, and the chances of it coming back are very low."

Our first reactions were ones of disbelief ... how can it be that both Mark and Cristy needed to have surgery to remove a cancerous tumor/cyst from one of their own kidneys, as they were being tested to be kidney donors for their own daughter, who has a rare kidney disease. Mark & Cristy have been told that people with certain types of kidney diseases are more prone to getting the type of kidney cancer that they both have. And as they are both carriers of Juvenile Nephronophthisis (JN), which they gave to Crystal, the doctors are interested in studying this possibility further as an explanation to this unusual, and unbelievable situation.

We are all in shock, and at the same time, we are filled with thanks to God for His care in the discovery of this cancer in both Mark and Cristy. Discovery at very early state, so that it could be removed completely, with no chemo needed. Follow-up checkups will come every six months now. Please pray for both of them, for peace of mind, and for no re-occurrences.

Cristy's recovery is going well now, though it has had it's pain and trauma ... and one week later, she is mostly free from the surgical pain, as well as from bad headaches she was also experiencing. Please pray for complete healing in every way, and for an extra measure of God's peace and grace to our dear daughter and her family. They are so grateful for all those who are praying, and for all the care they are receiving from their many friends there in TX.
Posted by Gary and Cherry at 6:08 PM No comments: 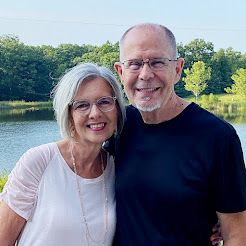 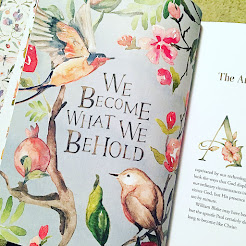